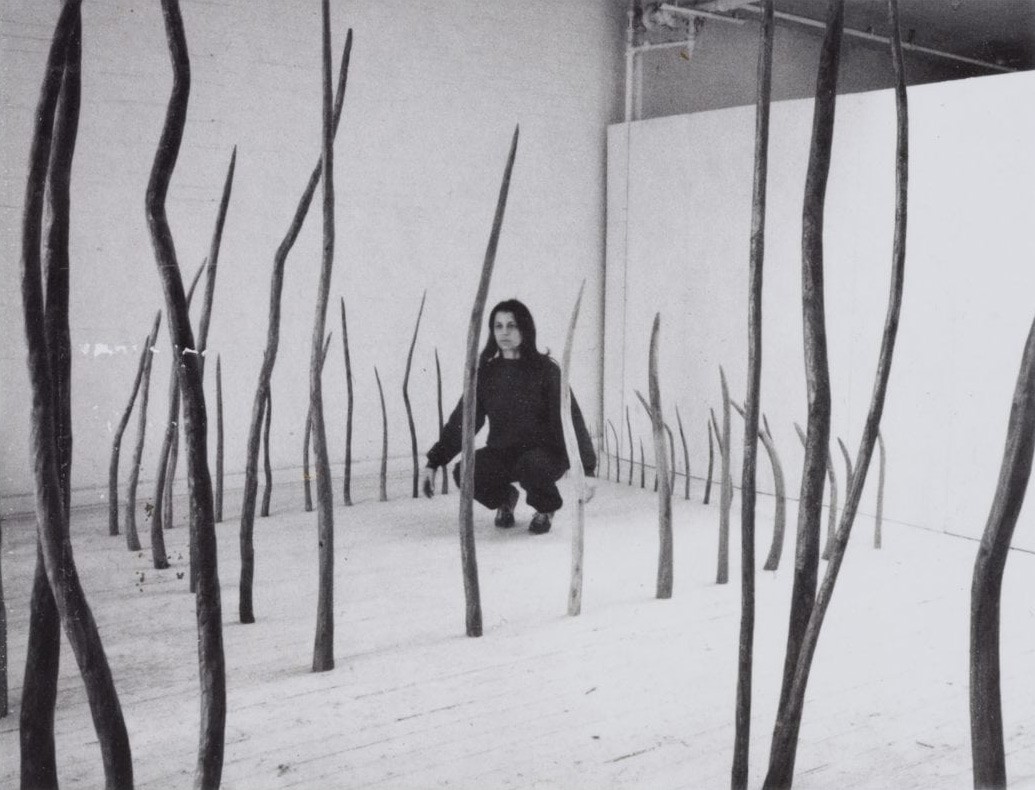 
Following her first major European retrospective last year at MACBA, Barcelona, Galerie Thaddaeus Ropac is pleased to announce its first solo exhibition of American Minimalist Rosemarie Castoro (1939-2015) at the Paris Marais gallery. Coinciding with what would have been the 80th anniversary of the artist’s birth, the exhibition encompasses all aspects of Castoro’s multi-faceted practice, spanning the mid-sixties to the mid-eighties. Presenting seminal pieces from each of her distinctive bodies of work, this survey exhibition explores her pivotal contribution to the development of abstract painting, sculpture, conceptual drawing, concrete poetry and performance. From her early paintings, which led Frank Stella to proclaim her among the greatest colourists of their time, to her monochrome gestural wall works and the large-scale organic sculptural forms that became her hallmark, Castoro’s work – long overshadowed by that of her male peers – is a rediscovery to today’s audiences.

Rosemarie Castoro was a central figure of the New York art scene in the 1960s, together with her then-husband Carl Andre, and her Soho loft studio became a hub for Sol Lewitt, Richard Long, Lawrence Weiner, Lee Lozano, Michael Heizer, Robert Smithson, Seth Siegelaub and other protagonists in the tightly knit scene of the time. One of the few women associated with Minimalism, she broke the artistic boundaries of the time by introducing surreal and sexual allusions into the rigour of Minimalism. In fact, she playfully rejected the term ‘Minimalist’ in relation to her own work, stating in 1986: “I’m not a Minimalist, I’m a Maximust!”. Throughout her life she showed a tendency to blend media – declaring herself a ‘paintersculptor’ – and her work was pioneering across disciplines. The feminist critic and curator Lucy R. Lippard later identified her as a figure who ‘subverted or overrode Minimalism on its own turf’.

In 1969 Castoro announced the quintessential testimony to her practice in the Concrete Poem that gives the exhibition its title:

BETWEEN WAKEFULNESS AND SLEEP

BETWEEN METHOD AND OBJECT

Not only does the poem demonstrate the importance of language in her work – she would often use wordplay or double entendres in titling her works – but it also maps the territory of her interest in the intersections between time and space, the rational and the surreal.

Castoro’s early practice was focused predominantly on painting, in which she explored the potentialities of the line in successive series of works. Her Prismacolour paintings are each organised around a different acute angle and predominately rendered in a single hue. Acrylic paint is stroked diagonally across the raw canvas, following the angles set for that work, reinforced by parallel pencil lines that are drawn over the painted surface. The all-over patterning of her ‘Y’ paintings suggests infinite repetition, reaching out beyond the limits of the painted canvas. Her colour compositions range from powerfully intersected, primary tones to subtle hues expressing the mood of a specific day.

During the late 1960s, Castoro developed an experimental practice consisting of visual and conceptual text-based works as well as artist’s Journals. The journals provide precious insight into her creative process and testify of a number of key components of her overall practice, notably her performative approach. They contain photographs of her performatively interacting with her own work by adopting acrobatic poses – a clear extension of her training as a dancer. As other conceptual artists of the time, she was inclined to transform mundane activities into art. In the Concrete Poetry album A Day in the Life of a Conscientious Objector (1968), adapting a term that was used at the time by opponents to the Vietnam War, Castoro reflects on her life as an artist through everyday studio activities.

By the beginning of the 1970s Castoro abandoned colour in favour of grey-scale graphite surfaces. With a broom she began to ‘paint’ the surfaces of these sculptures with an impasto of graphite and gesso, creating intensely dynamic gestural paintings, such as the early Triptych (1970) installation marking the first step of her paintings literally “coming down from the walls”. Among her following wall reliefs are those based on short-hand symbols for the initials of artist friends and peers, including Guinness Martin (1972) dedicated to Agnes Martin. About her relationship with Martin, Castoro recalled: “I had met Agnes in her studio in the late 1960s. We were both painters who made ‘paste-ups’ for a living, with triangles and T-squares on drafting boards as our tools in trade. Back then painters had a camaraderie, meeting through other painters. Often we would meet at bars, or visit each other’s studios for tea. In 1972 I made a ‘cut-out’ brush work for Agnes which was part of a series of wall sculptures created with a non-art brush that spelled out her name in Pitman shorthand ‘Guinness Martin’ came about as a disguise of Agnes’s name.” By the mid-1970s her works reveal a surrealist dynamic: she conceptualises herself as a female giant inhabiting her studio building with her ‘Giant Brushstroke’ pieces growing out of the walls like the imposing Armpit Hair (1972) wall sculpture presented in the exhibition. Her later dark organic epoxy sculptures such as Land of Lashes (1976), a phalanx of giant eyelashes uncomfortably suggestive of spiders invading the space, address the bodily relationship even more directly.

In 1979 Castoro created a new sculptural experiment, the ‘Flashers’, over two meter high black steel structures exhibited first in public spaces in Manhattan and by 1983 in Paris on the banks of the Seine river. The shape of the ‘Flashers’ originates in a moment when Castoro curved and bent a $20 note and stood it upright. The title evokes bodily exposure, ‘the grey rain coat that dirty old men wear and flash at innocent girls’, as Castoro explained. Curator Tanya Barson stresses Castoro’s ‘interest in manifesting different aspects of sexuality and, like flashers themselves, evoking simultaneously the threatening, the comic, and the pathetic’. Although Castoro did not identify herself as a feminist, she would come to redefine the fields of minimalism, post-minimalism and conceptual art throughout her practice, bridging new grounds each time with a renewed sense of female empowerment.

The exhibition is curated by Anke Kempkes.