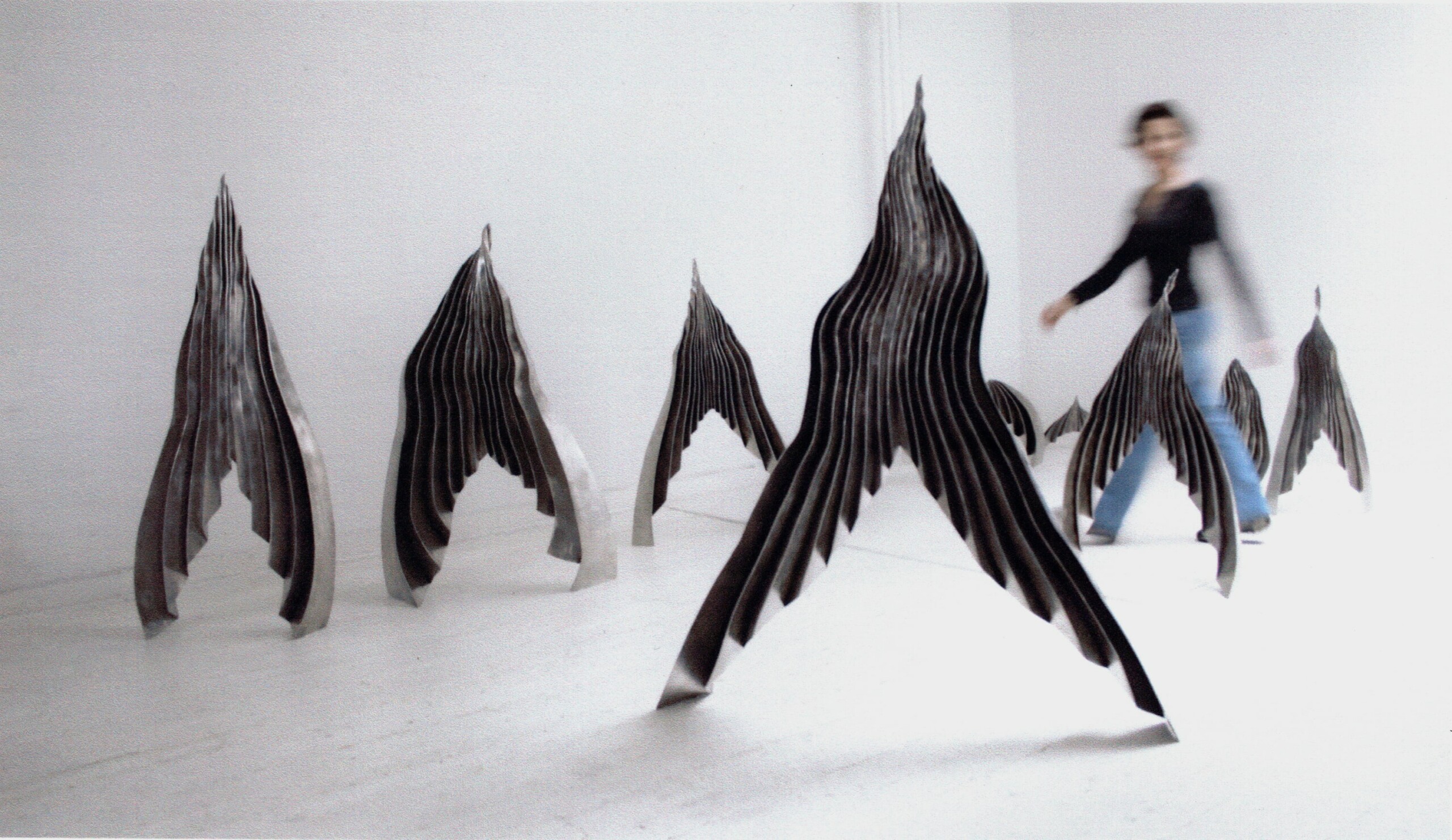 The first solo presentation in the UK of works by Rosemarie Castoro (1939-2015), a central figure in New York’s minimal and post-minimal art scene, spans four decades of her multidisciplinary practice. The exhibition focuses on her giant Brushstrokes and gesso sculptures from the 1970s, shown alongside a site-specific recreation of her architectural intervention Cracking and a grouping of important late works in welded metal.

Taking its name from art critic and curator Lucy R. Lippard’s essay Working Out (1975), the exhibition emphasises the physicality of Castoro’s approach to art-making, which was informed by her background in dance. She found early inspiration in experimental dance and choreography while a student at the Pratt Institute, Brooklyn, and in subsequent collaborations with choreographer Yvonne Rainer in the 1960s. Throughout her life, her work exhibited a distinctly performative character and understanding of space and movement.

Castoro’s continuous activity focuses on line as a formal solution. Although sexual in its drive, her work is too fast to be sensuous, too controlled to release all of its energy; it exists in a state of extremely structured tension, its momentum expressed with great physical intelligence by implied projection of the body […] into space.

Rosemarie Castoro formed her unique artistic practice within the context of minimalist and conceptual art in the 1960s, sharing a SoHo loft with then-partner and fellow artist Carl Andre that became a social hub for creatives, including Lawrence Weiner, Richard Long and Sol LeWitt. Despite her centrality to the New York art scene, she was not afforded the same visibility and institutional support as her male contemporaries who rose to international fame. Her exclusion from the major exhibition The Art of the Real, curated by E.C. Goossen at The Museum of Modern Art in 1968, reflected contemporary attitudes towards women, but also Castoro’s departure from the minimalist mainstream.

Lucy R. Lippard was an early champion of Castoro’s work, which was featured in the seminal Number Shows she curated, including 557,087 at the Seattle World’s Fair Pavilion in September 1969, followed a few months later by 955,000 at the Vancouver Art Gallery. In recent years, her work has been shown internationally at institutions including the Centre Pompidou, LACMA and MAK as well as in solo exhibitions at MAMCO, Geneva and MACBA, Barcelona. Her installation of giant epoxy eyelashes, titled Land of Lashes (1976), was included in the 2018 group exhibition Land of Lads, Land of Lashes at Thaddaeus Ropac, London.

In her 1971 response to Linda Nochlin’s ‘Why Have There Been No Great Women Artists?’, Castoro recalled gallerist Leo Castelli saying that he liked her paintings very much and assumed she ‘was a boy’. Her reaction was to return to her studio and start her next body of work:

I became hostile. It kept me working. I finally isolated myself, climbing the walls in my studio, snarling at whoever crossed my path. I moved ceilings, cracked rooms, dumped paint in the streets. […] I think artists transgress all boundaries and should not be segregated according to the comfortable academic niches supplied by curators, let alone by society.

Defying easy categorisation, Castoro considered herself a ‘paintersculptor’. Neither wholly minimalist nor a self-described feminist, she has been defined by Lippard as one of the women artists ‘who subverted or overrode Minimalism on its own turf’. There is a bodily, sexualised dimension to her work that is rarely present in minimalism, with its emphasis on rational, mathematical principles. Describing her work as the place ‘to watch yourself’ and ‘manifestations of sexuality’, she projected herself into her creations by introducing biological and biographical elements. In this way, her embodied, eroticised form of abstraction functions at the intersection of minimalism and empowered female identity.

Rosemarie Castoro’s early paintings explored sophisticated colour relationships, but she began working monochromatically from around 1970, in part as a political reaction to the ongoing Vietnam War. She describes how, in 1972, her ‘brushstrokes snapped away and landed smack on the existing brick walls of my studio’. The giant Brushstrokes were created by applying a mixture of gesso, modelling paste and marble dust to Masonite panels with a broom or other non-artist-brushes, leaving large gestural striations into which Castoro rubbed graphite. She then carefully cut out the shapes, using a sabre saw to create the delicate, fragmented edges that heighten the illusion of an enlarged brushstroke on the wall.

The earliest Brushstrokes consisted of single flowing strokes, which later grew into multi-part wall installations such as Mimic (1972). These were often installed so that they appeared to emerge organically from the corner of a room, as in Corner Cut, or growing downwards from the ceiling, as in Bangs (both 1972). This interplay between artwork and architecture represented the artist’s desire to ‘relate to myself as a building… parts of me coming off different parts of the wall’. Lippard has described how the ‘brushstrokes soon acquired an animistic life of their own and developed from abstractions into […] smaller hairpinlike stick figures – “groups of people in the streets relating to each other”‘, as in FITTING IN (1973/2016). Castoro referred to these small figural groupings, which convey the essence of human postures, social gatherings and physical movement, as ‘exoskeletal auras as wall sculpture’.

Around the same time, Castoro was experimenting with other architectural interventions, such as Small Burial (1973). The artist described how, while teaching sculpture at the University of California, Fresno, she was ‘devoid of the New York crowds of people’ and ‘felt an isolation that was relieved by staring into a barrel of wire’. Using this wire, Masonite, gesso and modelling paste, she created twig-like stalactites that grew down from the ceiling. ‘People’s roots were growing down through my neighbour’s floor into my coffin-like apartment,’ she later said. ‘Upon returning to New York, agriculture lifted my mood. I realised that to bury something enabled it to grow.’

A site-specific intervention will be recreated for this exhibition, based on the artist’s Cracking worksfrom 1969. The idea first took shape in March of that year when, while cycling home at midnight, a leaking tin of white paint left a linear trail behind her. She adapted this concept to create a division in her loft space: ‘Needing more clarity as to living and working functions, the loft was divided with a shiny aluminium taped line. On one side were living functions and the other, art. Line as reality. Drawing to describe function. Setting up a barrier and crossing it. Walking into a painting.’ In April 1969, she ‘cracked’ a block of the sidewalk along 13th Street in New York, using a line of silver tape, and later applied the same treatment to the interior of Paula Cooper Gallery in New York and the Seattle World’s Fair Center.

Rosemarie Castoro first began welding in the late 1980s, refining her skills and techniques over the years to find its most sophisticated expression in the curved lines and complex folds of her multi-part sculptural installation Mountain Range (2003-06). ‘I am currently welding stainless steel, free-standing arches, in the continuation of building a mountain range,’ she wrote. This was preceded by a series of ethereal, hand-moulded forms in wire mesh that the artist called Mosquito Networks, created while she was teaching in Italy and did not have access to her studio of welding equipment. Whether formed by hand or with an electric arc, Castoro’s intensely physical engagement with her works was evident throughout her career.

The exhibition is accompanied by a new text by the Paris-based writer Rachel Stella, who is currently working on a book about Rosemarie Castoro.